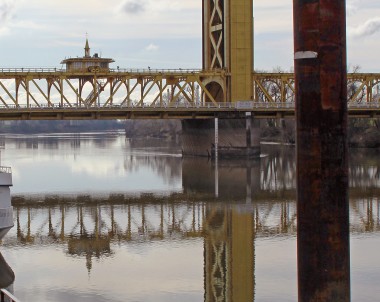 In the city straight lines are easy to find.The water looks almost like Glass.
The river bordering Old Town, where Sacramento grew during the Gold Rush 1849
to a sprawling city, as it was connected to highway 49, the main vein of gold back then,
and became later the Capital of California.
They say there is still gold in California, but too costly to get to.
ABC Wed. – G, Weekend Reflection

One of my non-digital images.
The Inner Court Yard  of the beautiful castle St Germain-en-Laye in St. Germain (suburb N. of Paris). We were allowed to visit certain parts, so we did not go on the 2nd or 3rd story. It’s now a museum of Antiquities.  Am counting at least 2-3 DOORS, and several arch ways.
This was the time we visited Paris to investigate about my maternal background, but did not come very far, because my French is just un petite peu (a little bit).

At one point in time the French government wanted to give the castles back to the families who once owned it ( in the fifties), if they would renovate it.  Uncle Louis received that letter, but unfortunately uncle Louis was a social worker, no millionaire.

We discovered that St Germain is a common name in the nobility families, and just wanted to find out which castle once belonged to my mothers family.
Tue Treasure, Tue Travel, Thurs. Doors.

Love your comment! For you on Blogspot, I'll reply on your blog, since you otherwise won't see my reply. Sorry, can't reach you if you have a google+ . If you have your profile set on Google account, I will not be able to comment back, since I opted out of the Google Analytics. Cancel reply